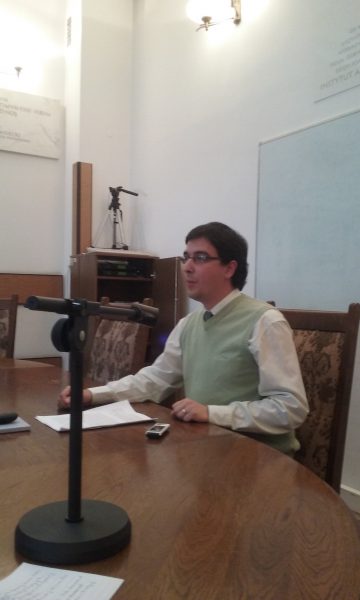 We are happy to invite you to a lecture 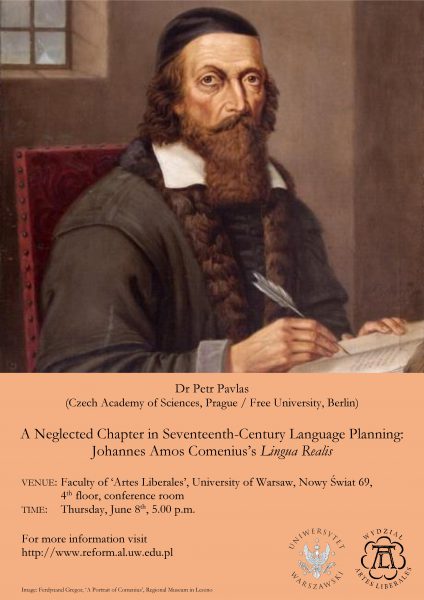 Jitse van der Meer and Richard Oosterhoff suggest that the unsuccessful Protestant attempt to mark out the boundaries of allegorical biblical exegesis and to fix the meaning of scriptural passages caused an awareness of the imperfection of the verbal language. Therefore, early modern philosophers “turned to nature” and strove to find the perfect language in mathematics and logic.

This hypothesis needs to be revised: already the entire Middle Ages had been aware of the corrupted nature of verbal language. Rather, the decisive impulse for the rise of the perfect language movement seems to have been the doctrinal plurality and confessional diversity following the Reformation.  For it was due to this that many turned to arguments from natural theology in order to persuade their opponents or establish doctrinal consent.  To avoid logomachy, some early modern philosophers sought to develop the perfect and universal language. One of these was Johannes Amos Comenius.

The aim of this paper is to outline Comenius’s design of the “real language” (lingua realis).  For this represents an important chapter in the history of early modern language planning.  In particular, the paper seeks to show how Comenius’s project – with its “logical purism”, its programme of “word as definition”, its combinatorial ambitions and its desire not to restore but to create the perfect language –  belongs to the early modern tradition of mathematizing thought. An important theme is the possible mutual influence between the different projects of Jan Amos Comenius, John Pell, Cheney Culpeper and Francis Lodwick. Overall, the paper is intended to complement Rhodri Lewis’s discoveries in this field, but from the perspective of Comenius studies.

Petr Pavlas is a Postdoctoral Researcher in the Department of Comenius Studies and Early Modern Intellectual History in the Institute of Philosophy of the Czech Academy of Sciences, Prague, and Assistant Professor in the Department of Philosophy of the University of West Bohemia, Pilsen, Czech Republic. He is currently doing research on the idea of perfect language in the works of Johannes Amos Comenius at the Free University in Berlin. His publications include articles in English and Czech in Studia Comeniana et Historica, Teorie Vědy. Theory of Science, and in volumes of studies.